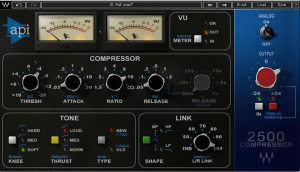 VCA compressors, or voltage controlled amplifier compressors, use a control signal to dictate whether or not gain reduction is applied to an audio signal. These are some of the most common types of compressors and often include all the controls you’re used to seeing on plugin compressors, like attack, release, threshold, ratio, and sometimes a knee.

Generally, VCA compressors provide a very precise level of control, and a sound that’s predictable and clean. In addition to being a popular choice for vocals, VCA compressors are often used for mastering purposes because of the transparency they tend to provide.

The API 2500+ Stereo Bus Compressor is a popular VCA compressor that includes a unique “THRUST” feature that places a filter in front of its RMS detector. This filter imbues each octave with equal energy, instead of half the energy as the next lowest one. The result is a “punchy” sound that lacks the undesirable “pumping” effects that other compressors often provide.

Arguably one of the most popular VCA compressors used to make mixes sound “snappy,” “punchy,” and “huge” is the Solid State Logic (SSL) G Comp. This compressor is designed after the legendary centre section module from SSL’s G-Series analog console of the 1980s. You’ve undoubtedly heard the original unit used on the stereo bus of countless hits.

With a talent pool as varied as the three favorites I just listed (not to mention the ones I didn’t), it’s a bit tough to narrow down one distinct category of ideal uses for VCA compressors.

The Distressor is a real desert island compressor. If you’re looking for one piece to handle every compression task in your studio, it would be a prime contender. Dial in transparent vocal compression, fine tuned transient sculpting on drum close mics or brutal room mic destruction — and then add one of two flavours of tasteful harmonic distortion as a garnish.

The dbx 160 has a tendency to deliver just the right kind of compression for snare drums and claps. I’d give you details on how to do it, but it literally only has ratio and makeup gain controls. I think you’ll figure it out just fine on your own. I also like the dbx anywhere I want to make percussive source material excited and ugly. You’ll get snap and pleasant saturation for days from just about any application of the 160.

The SSL G series buss compressor is no one trick pony, but try throwing it on a buss with the attack at 30 ms and the release at 100. Dial in a couple dB of compression at a modest ratio for an instant, idiot-proof “betterizer.”